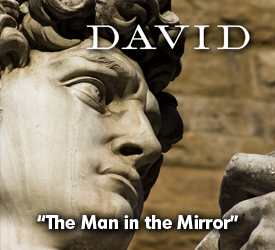 The Man in the Mirror

David lived 3,000 years ago and was a great man, who served a great nation, under a great God, with great passion. Even though he was called "a man after God's own heart", when he hit middle age (about fifty) he had an affair, a one night stand with a woman named Bathsheba. Rather than confess his sin, he tried to cover it and in the process had her husband, Uriah, murdered. Almost a year went by and an outside observer would have felt that David had committed the perfect crime--that he had gotten away with it and that God decided to give David a free pass.

"The truth of the matter is we all sin and God knows that and God realizes that. But what concerns God is when we sin and when we are confronted with our sin--how do we respond?" --Dr. Merritt