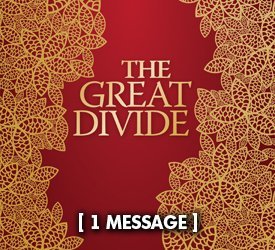 In the American West is an area of the Rocky Mountains known as the Continental Divide. It is what separates the rivers and streams that flow eastward into the Atlantic Ocean from those that flow westward to the Pacific Ocean. It is literally the dividing line between the east and the west. The two sides of that mountain range, though very close, are actually worlds apart. That's how it is with people, as well.

There are people who come from the same backgrounds, have the same opportunities, in many cases even many of the same genes and chromosomes, the same gifts and abilities, the same outlook on life, and yet when they die they will wind up literally worlds apart, never to see each other again. In the parable of the rich man and Lazarus that Jesus told in Luke 16, He took a snapshot of the other side of the grave. He pulls back the curtains of eternity and gives us a look at the unseen world, and shows us the immediate fate of two men who died; one who died with God, and the other who died without God. In this message, Dr. Merritt details the great spiritual divide--the one difference that makes all the difference in the world.

"You see, the problem was, the rich man had everything except God and he was satisfied. The poor man had nothing but God, yet he was saved. To put it another way, the man who was rich materially was actually poor spiritually, and the man that was poor materially was rich spiritually." --Dr. Merritt