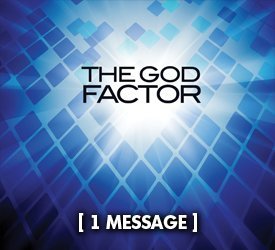 One of the things that is true about so many Christ followers is they don’t realize that every day is a war and every day battles await us in so many parts of our lives. Some fight for their marriage, or fight for their children. Some are in a financial battle. Some are having a fitness battle. Some are having a faithfulness battle. In this message, Dr. Merritt will help you understand the one key to winning both the battles and the war and that is "The God Factor".

Too many Christ followers are being defeated in their daily battles because some are not even showing up for the war. Others do not even know a war is going on. But most defeats are because the God factor is ignored. In an incident that took place with the nation of Israel, we are going to see how we can bring the God Factor to bear in our daily lives and gives us victories in our greatest battles.