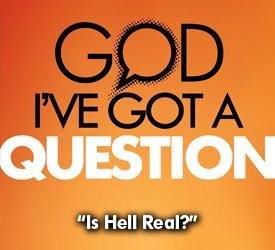 One aspect of Christianity that is unique is our belief in one of two eternal destinations--heaven, or eternal paradise. And its opposite is hell--eternal punishment. Though other religions believe in the concept of hell, only Christians believe that God Himself has provided us a way out of eternal punishment for our sins through His own Son. Hell, as a concept, though, is not universal to all religions. Some religious people, such as Hindus and Buddhists, do not believe in the idea of hell at all. Increasingly, this world refuses to believe in the concept of hell. Even those who believe it may be a real place don’t believe very many people are going there – most of all themselves. For every American who believes they are going to hell 120 believe they are going to heaven. We've all heard the question, "How could a loving God send anyone to hell?" The reality is that He is loving and at the same time, many will die and go to a place of eternal punishment called hell. In this message, Dr. Merritt unpacks the difficult reality and doctrine of hell.