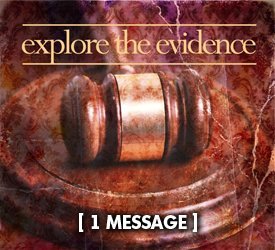 Was Jesus really raised from the dead? What if this primary fact of the Gospel was put to the legal test? Would the evidence stand in a court of law? Jesus doesn't need anyone to defend Him--but there are questions in the hearts of men that caused the apostle Luke to write an account of Christ's resurrection that looks much like a lawyer's argument of a case. Many people call Jesus a great man, others call Him a great teacher, still others call Him a great philosopher and almost everyone agrees He was a great moral example. The reality is that He is none-of-the-above if He died and did not come back from the grave. He himself promised over and over that He would--and He did! In this message, Dr. Merritt presents convincing proof from the Bible that the resurrection of Christ did occur exactly as written. Two billion people have staked their lives and their eternity of this fact. Explore the evidence of the greatest miracle in all of human history.

"There were a tremendous number of different people who were willing to bear witness they had seen Jesus Christ alive after His crucifixion. In fact, when you put all the scriptures together, we are told that Jesus appeared on 10 different occasions over a period of 6 weeks to at least 516 witnesses. He appeared in the morning, in the afternoon, and in the evening. He appeared indoors. He appeared outdoors." --Dr. Merritt